John Flavel on Union with Christ: A Response to John Fesko

In last week’s episode of the podcast “Office Hours,” Scott Clark interviews John Fesko regarding his recent book, Beyond Calvin: Union with Christ and Justification in Early Modern Reformed Theology (1517-1700). In the last 7 minutes of the interview they briefly discuss my article, “John Flavel on the Priority of Union with Christ: Further Historical Perspective on the Structure of Reformed Soteriology,” published this spring in the Westminster Theological Journal. Humorously, just after Fesko mentions the “frustrating feature” of many 17th century theologians who fail to name those they argue against in their writings, neither Scott Clark nor John Fesko mention my name, the full title of my article, or the journal in which it is published. Briefly, I would like to respond to several of the criticisms Fesko raises.

Broadly, Fesko classifies my approach to Flavel as “Whig historiography,” claiming that my argument is trans-historical, using Calvin and Flavel simply to prove that my position, and those I agree with, is the correct one. He believes I disregard four centuries of doctrinal discussion and development and simply want to draw a straight line to the present day. This, however, misconstrues the thesis of my paper.

My stated aim is to address challenges by Fesko in his previous articles where he claims that Dr. Richard Gaffin has a peculiar way of reading Calvin that he describes as “idiosyncratic,” questioning whether Gaffin, and others with similar views of the role of union with Christ in Reformed soteriology, can justify their claims with reference to further works in the development of Reformed theology.[1] My argument is that John Flavel, writing in the later half of the 17th century, provides such historical evidence. I am clearly not writing to argue that Calvin and Flavel agree with me, therefore I am right. My aim is to provide historical evidence in the development of Reformed soteriology of a particular way of understanding the role of union with Christ, one that disagrees with Fesko’s own understanding of the period.

I am surprised that after reading my article, Fesko can charge me with failing to discuss the historical context or other works of the time period. I believe any fair reading will demonstrate that I do. Before discussing Flavel’s own works, I address controversy in his own time concerning the doctrine of union with Christ and the response to it. I also mention a number of other works written in the same time period, including individuals such as William Ames, Joseph Hall, John Brinsley, Thomas Lye, Rowland Stedman, Edward Pearse, John Lougher, and Edward Polhill. In my reading, each of these individuals provides a similar understanding of the role of union with Christ in the structure of Reformed soteriology and in relation to justification. Though I attempt to provide a thorough analysis of Flavel, I do not disregard the context in which he’s writing, as Fesko seems to suggest.

I am also disappointed that Fesko characterizes my approach to Flavel as “cherry picking,” claiming that I only give attention to an “isolated portion of Flavel’s works” and provide a “narrow reading of Flavel.” This charge is difficult to fathom. In my article I thoroughly deal with Flavel’s primary work on union with Christ, The Method of Grace, a 474 page volume, as well as numerous other works where he addresses the topic, such as The Fountain of Life, his Exposition of the (Westminster) Assembly’s Shorter Catechism, England’s Duty Under the Present Gospel Liberty, as well as several other shorter pieces found throughout the six volumes of his collected works.

One work that Fesko finds important, and notes that I do not address, is Flavel’s Planēlogia.[2] One would have a difficult time finding this work under that name, because in The Works of John Flavel it is published in volume 3 under the title The Occasions, Causes, Nature, Rise, Growth and Remedies of Mental Errors together with several appendices, postscripts and a sermon titled Gospel Unity Recommended to the Churches of Christ. All of these together were initially published as Planēlogia. Fesko describes it as a key work of Flavel’s that demonstrates my “narrow reading” is inaccurate.

Fesko claims that in Planēlogia, “Flavel talks about the decree to justify the elect, and in terms of the elect’s union with Christ being based on the imputed righteousness of Christ.” If I understand him correctly, similar to his claims elsewhere, he believes that in the broader structure of Flavel’s soteriology, justification has priority because imputation is always a prior category as found in God’s eternal decree. Thus the mystical union is grounded on imputation.

In turning to this work by Flavel, however, one sees that Fesko’s reading mischaracterizes what Flavel writes.[3] For those who have The Works of John Flavel at hand, the specific reference I believe Fesko points to is found in volume 3 on page 559. Here Flavel criticizes the Antinomian assertion of eternal justification. He allows that justification may be considered from the vantage point of God’s eternal decree but emphasizes its execution in time. As he discusses its execution in time, Flavel distinguishes between “its impetration by Christ” (or redemption’s accomplishment in Christ’s work) and “its application to us.” Flavel then describes the relationship between effectual calling and justification, and writes, “When an elect sinner is united to Christ by faith, and so passeth from death to life, from a state of condemnation into a state of absolution and favour; this is our actual justification.”[4] He goes on to say, “As soon as we are received into communion with Christ, and his righteousness is imputed by God . . . immediately we pass from a state of death and condemnation to a state of life and justification.”[5] It is clear that while allowing for an eternal vantage point, for Flavel actual imputation and justification follow union with Christ, in contrast to Fesko’s claims. If there is any doubt, later in the same work Flavel states, “the righteousness of Christ is by God imputed to believers, by virtue of their union with Christ.”[6]

In this work, Flavel simply does not characterize union with Christ and imputation in the way that Fesko claims. The elect’s union with Christ is not based on the imputed righteousness of Christ. Flavel clearly states the opposite, that union with Christ is the basis for the imputation of Christ’s righteousness in the application of redemption. In fact, if one reads the entirety of Planēlogia, in several places Flavel characterizes union with Christ, communion with Christ, and the various benefits in the way that I describe in my article.[7] It’s difficult to conceive how Fesko can charge me with “cherry picking” when he mentions this one work and then, it seems to me, mischaracterizes its content. It’s one thing to be accused of a historiographical fallacy, of which I don’t think I’m guilty. It’s an even more basic matter to correctly read an historical text.

Fesko’s criticism further illustrates a point I make in my article as I assess the value of Flavel for the current debate.[8] It appears to me that Fesko’s formulation continues to confuse broader soteriological categories, which Flavel maintains distinct. At times, I believe, Fesko confuses the categories of redemption accomplished with redemption applied as he talks about the relationship between justification and sanctification in union with Christ.[9] Here he appears to confuse the eternal decree, which indeed includes imputation, with its actual application in time, and the relationship it sustains to other elements in the framework of soteriology. In other words, noting that the imputation of Christ’s righteousness is an aspect of the eternal decree within the pactum salutis, as Fesko does, in no way gives it priority in the actual application of redemption. The purview of my article, and I believe the weight of Flavel’s discussion, is the application of redemption which begins with union with Christ, then communion in all of his privileges, justification and sanctification together included.

[2] I actually do quote a portion of this work, which is under the title Gospel Unity Recommended to the Churches of Christ in volume 3 of The Works of John Flavel published by Banner of Truth. This sermon was originally appended to Planēlogia. See my article, “John Flavel on the Priority of Union with Christ,” WTJ 74 (2012), 46.

[3] I am fairly certain that the place Fesko refers to is in an appendix to the work under the title, “The Second Appendix: Giving a brief Account of the Rise and Growth of Antinomianism; the Deduction of the principal Errors of that Sect, With modest and seasonable reflections upon them” (vol. 3 of The Works of John Flavel), 551.

[7] Ibid., 557 where Flavel describes “receiving Christ as the gospel offers him for righteousness and life;” 562 where he states that “as the sin of Adam condemns none but those that are in him; so the righteousness of Christ actually justifies none but those that are in him; and none are actually in him but believers;” 563 where he writes that “it must be absurd also to place justification before vocation,” or effectual calling in which we are united to Christ; 567 where he describes how we can “remain a perfect stranger to all saving union and communion with him.”

Editors Note: Rev. Edwards discussed his article in more detail on episode 246 of Christ the Center.

Rob Edwards is church planter at Mercy Presbyterian Church (PCA) in Forest, Virginia, which is just outside of Lynchburg. Rev. Edwards graduated from Westminster Theological Seminary in 1999 and went into Reformed University Fellowship where he became the campus minister of University of Georgia.
All Posts

Facebook
Twitter
LinkedIn
Email
PrevPreviousOrigins of the Modern American Testimony?
NextUnion with Christ: Historically Most Basic (Part 1)Next
On Key 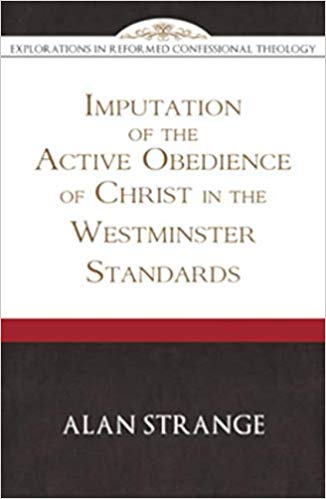 Each presbytery meeting, we usually have the opportunity to examine candidates for licensure and ordination.As you’d expect, these exams cover important topics pertaining to the