A Matter of Eternal Weight

Sola fide (“by faith alone”) is the Reformation’s most notorious doctrine and resides at the core of all Protestant identity. Of course it would be a reductionism to say the Reformers were only concerned with justification by faith alone; nonetheless, it was, in the words of Luther, articulus stantis et cadentis ecclesiae (“the article by which the church stands and falls”). It was here the true church fought the good fight of faith, many even unto martyrdom. The consequence of compromise was not negligible, but carried in its wake the very forfeiture of the power of God for salvation (Rom. 1:16). It was not merely a matter of life and death, but of eternal life and eternal death as it had a direct impact on the gospel of Jesus Christ.

The Westminster Larger Catechism defines justification as “an act of God’s free grace unto sinners, in which he pardoneth all their sins, accepteth and accounteth their persons righteous in his sight; not for anything wrought in them, or done by them, but only for the perfect obedience and full satisfaction of Christ, by God imputed to them, and received by faith alone” (70). In a more succinct fashion, Bavinck defines it as “that gracious judicial act of God by which he acquits humans of all the guilt and punishment of sin and confers on them the right to eternal life.” Paul states the matter clearly in Galatians 2:9ff that “a person is not justified by works of the law but through faith in Jesus Christ, so we also have believed in Christ Jesus, in order to be justified by faith in Christ and not by works of the law, because by works of the law no one will be justified.”

Any doctrine of salvation that undermines sola fide by requiring any kind or amount of merit that is not supplied by Christ, must be considered (in the full sense Paul meant it in Philippians 3:8) σκύβαλον—”rubbish” is an understatement. Why must we do this? In order that we may gain Christ and be found in him, not having a righteousness of our own that comes from the law, but that which comes through faith in Christ, the righteousness from God that depends on faith (Phil. 3:8-9).

Calvin compared faith to an “empty vase” that is filled with and only with the righteousness of Christ. Luther said faith “clasps Christ as a ring clasps its jewel.” And by faith we sing, “Nothing in my hand I bring, simply to thy cross I cling.” With these pictures before us, a twin truth emerges. First, by faith we believe that we are truly sinners incapable of saving ourselves, devoid of any work that could contribute to our righteous standing before God. Second, by faith we believe that out of grace God justifies us for Christ’s sake, which brings us to glory in the fullness and wholeness of our Savior whose perfect righteousness has been freely and graciously imputed to us apart from works. Luther would speak of this righteousness of Christ by which sinners are justified as an “alien” righteousness—it is a righteousness not our own. Bavinck summarizes,

The Belgic Confession on Sola Fide: A Whole Savior

The Belgic Confession was forged in the fires of the Reformation primarily by Guido de Brès in early 1561. The Synod of Dort (1618-19) would later adopt the confession as one of the doctrinal standards of the Reformed Churches.[1]

Article 22 (“Our Justification through Faith in Jesus Christ”) opens with a clear explanation of the source and content of faith, both of which serve the glory of God (soli Deo gloria). Its source is the Holy Spirit who “kindles in our hearts an upright faith.” While it is the believer who believes (neither the Spirit nor Christ believes for us), faith is nevertheless the gift of God, not a result of works, so that no one may boast (Eph. 2:9). Faith is not a personal achievement, but the end of all boasting before God.

This faith then “embraces Jesus Christ with all His merits, appropriates Him, and seeks nothing more besides him.” With Calvin the confession is clear that “as long as Christ remains outside of us, and we are separated from him, all that he has suffered and done for the salvation of the human race remains useless and is of no value to us.” Because faith embraces Jesus Christ, the question regarding salvation is never, “Is my faith sufficient?” (looking inward to the instrument), but “Is my Savior sufficient? (looking outward to the object). To an overwhelming degree, Christ answers Yes with the fullness of his merits, which he obtained in his life, death and resurrection. Faith does not embrace an abstract, bear or irrelevant Christ, but a Christ who is, in the words of Calvin, “clothed with his gospel” (Institutes, 3.2.6). To look to supplement the merits of Christ in any way is to say that “all things which are requisite to our salvation are not in Jesus Christ.” But by sola fide we say that “those who possess Jesus Christ through faith have complete salvation in Him.” He is not “half a Savior,” but a whole Savior.

Therefore we justly say with Paul, that we are justified by faith alone, or by faith apart from works. However, to speak more clearly, we do not mean that faith itself justifies us, for it is only an instrument with which we embrace Christ our righteousness. But Jesus Christ, imputing to us all His merits, and so many holy works which He has done for us and in our stead, is our righteousness. And faith is an instrument that keeps us in communion with Him in all His benefits, which, when they become ours, are more than sufficient to acquit us of our sins. (Belgic Confession 22)

Sola Fide and the Chief End of Man

Sola fide not only accents the glory of God in salvation, but also affords us assurance of right standing before God in order that we may enjoy him.

Certainly there can be no peace of mind and conscience, no joy in one’s heart, no buoyant moral activity, or a blessed life and death, before the guilt of sin is removed, all fear of punishment has been completely eradicated, and the certainty of eternal life in communion with God fills one’s consciousness with its consolation and power. (Bavinck)

The Belgic Confession puts it this way in article 23:

We always hold fast this foundation, ascribing all the glory to God, humbling ourselves before Him, and acknowledging ourselves to be such as we really are, without presuming to trust in any thing in ourselves, or in any merit of ours, relying and resting upon the obedience of Christ crucified alone, which becomes ours when we believe in Him. This is sufficient to cover all our iniquities, and to give us confidence in approaching God; freeing the conscience of fear, terror, and dread…

We can say then that sola fide complements the chief end of man: to glorify God and enjoy him forever. If justification is by faith alone, then God is to be maximally glorified in our salvation and we are to enjoy the wholeness of our Savior in whom we find eternal life.

[1] For more on the fascinating history of the Belgic Confession see Nicolaas H. Gootjes’ The Belgic Confession: Its History and Sources. See also the introduction of Daniel Hyde’s helpful exposition of the confession, With Heart and Mouth. 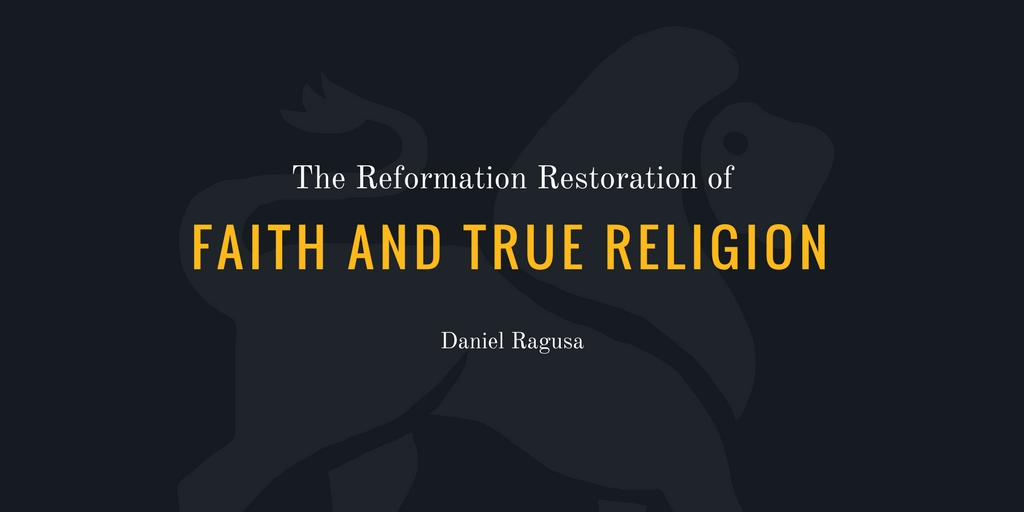